A few years ago I took a plein air workshop taught by Kelly Medford.  On the second day she made us do the following exercise on location.  First we painted a scene of our choice with a strict time limit.  As I recall we had an hour.  Then she asked us to study the scene for 5 minutes without painting and to make as many mental notes as we could. We put our first paintings away and moved our easels  to a spot where we could no longer see the scene.  We were given the same amount of time to paint the second one from memory. After we finished, we lined up our paintings and the group had to guess which was the one painted from memory.  The results were interesting.  Everyone was able to get a decent memory painting and the correct guesses were about 50/50.  As much as I enjoyed the exercise, I never did it again on my own.  I have seen beautiful paintings done from memory and I envy artists who can do it well.  Practicing this makes one a better observer and thus a better painter, because learning how to see is a big part of becoming a good artist.

Recently I saw a beautiful scene from an airplane.  The sun was setting just as the moon was rising.  The moon was full and the sun's reflections threw amazing color on the opposite horizon.  It was truly surreal.  I did not have a camera, but it was at such a sharp angle through the window that I doubt I could have taken a good shot.  I watched it as long as it lasted and made mental notes, something like this: from bottom to top there was a cool deep blue followed by a warmer violet blue.  Then lighter saturated pink with a small transition zone of some warm unsaturated yellows.  A warm lighter blue was at the top. The moon was yellow orange and occupied the blue-violet region.

I wish I had made written notes because it was a week before I had an opportunity to paint this, but it was still reasonably fresh in my mind.  I already had a 14"x14" stretched canvas that was primed with orange.  I had used oil paint mixed with cold wax so I decided to stick with that and paint with a palette knife, another thing I rarely do.  I did it in one session.  I have to be loose with a palette knife because I don't have much experience and I can't control it very well.  (Sort of like painting with my non-dominant hand.)

Here is what I got- nothing like I usually paint but it looks a lot like the actual scene. 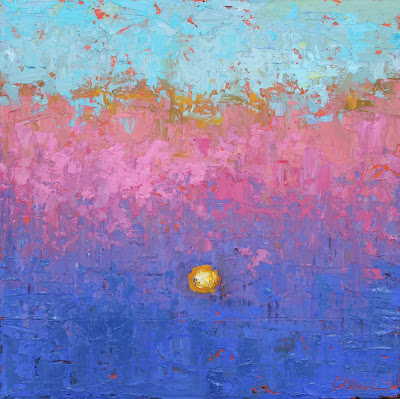 I usually tone my canvases with burnt sienna thinned with mineral spirits and wiped down, but when I paint with cold wax I like to start with a thicker layer of vibrant color.  I can let some show through (easy to do with a knife) or even carve out areas to reveal the base color as I go along.  Cold wax creates a lot of texture and I do not add additional medium when I use it.  I use about a 50/50 ratio of wax to paint, sometimes a little less wax for the first couple of layers.

From a compositional standpoint this is a very simple painting which helped with the memory piece.  I'm not ready to attempt a complicated landscape.  Baby steps... but memorizing a complex scene makes simplification a necessity.

Another thing to try, and I have done this to avoid direct sun on my panel, is to paint with your back to the scene.  This keeps the sun off if that is an issue and requires you to study the subject, then paint a bit before looking back.  Though not as challenging as painting the entire painting from memory, it forces you to really look and make mental notes before turning back to the canvas.

Posted by Colleen Parker at 12:49 PM No comments: