More about old canvases and landfills

In my January 27th post I talked about culling through my old paintings and discarding them on a regular basis,  saving digital images for my records instead.  In my last post, August 3rd, I suggested a way to salvage older paintings- make them better based on your current level of expertise.  But there will always be failed paintings no matter how accomplished an artist may be.  It is part of the creative process.  In one of my earliest workshops the instructor, quoting someone I can't recall, said "we all have bad paintings in us- we just have to paint them and get them out".

In the spirit of recycling I try to reduce landfill trash as much as possible because I believe it is important. However I do pitch unsuccessful paintings if I do not wipe them out on the spot. When I was just starting to paint, several instructors suggested painting over old paintings to salvage canvases.  I paint in oil so I cannot cover an old canvas with acrylic gesso.  I would have to use oil based gesso or a similar product.  Windsor Newton makes an oil paint called "Underpainting White" that can be used this way and is fast drying.  One instructor suggested painting directly over old paintings- turn the canvas upside down so one won't be distracted by what is already there.

I tried this for several years and I learned something about myself.  I hate painting on used canvases.  When I paint directly over old paintings I am very disoriented and it takes my focus away from what I am trying to paint.  When I tried using Underpainting White the texture was rough and kept my brush from moving freely.  One time I painted a successful painting over an older bad one only to realize that I could see the ghost of the previous painting through the new one.  Had I sanded the canvas this probably wouldn't have happened, but  I don't want to sand canvases.

I spend a lot of money on good quality paint and brushes.  I feel the same way about a fresh new canvas that has the feel that I enjoy and allows me to start out with transparent darks and to let my toned canvas show in areas of the final painting if I choose.  I make a lot of my panels now (future blog) which saves on the cost.  I have started painting on unmounted canvas taped to a support so I only have to pitch the canvas itself if the painting isn't successful.   I just mount the "keepers".

But that is just me.  Everyone has their own painting style.  If I used a lot of thick paint throughout my paintings or painted with a palette knife I don't think a used canvas would bother me at all. Occasionally I paint on an old canvas for exercises which is a cost saver.

Thomas Jefferson Kitts recently posted a thorough discussion about old paintings that was very entertaining and helpful to me.  Check it out- the link is to the right under "favorite blog posts". 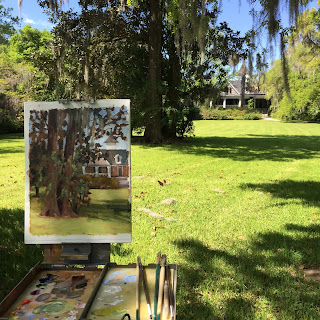 This is a painting I did on location, a very good oil primed linen canvas taped to a support.  I haven't mounted it yet, but I could.  This is a good way to reduce cost.

Thanks for looking and happy painting!

Posted by Colleen Parker at 5:33 PM No comments:

Critique your "younger" self.

In May I showed an example of a painting that was critiqued by a real professional and the changes I made based on that critique when I repainted the same scene later.  As I said then, never pass up an opportunity to learn from someone more accomplished.

Unfortunately there are not enough of those opportunities, at least for me.  Earlier this year I worked my way through a couple of boxes of my older paintings in order to make space for newer work.  Some of these had never left the studio but many had been in frames in various shows and on my website and never sold.  On average they were painted 3 years before.  I had no trouble putting many in the "to the landfill" pile.  (Yes, I know I could have painted over the canvases and I'm going to address that in a future blog.)  But there were quite a few that didn't look that bad and I found myself trying to think of ways to improve them.  It dawned on me that there is a more accomplished painter in my own home- me!  At least compared to me several years ago.  It became a fun exercise.  After all, if I was going to pitch them I had nothing to lose by trying to make them better, and it was a chance to practice my critiquing skills.  I found that in some cases just a few brushstrokes made a big difference.  If the basic composition wasn't good I didn't bother.  In some cases the focal point needed more development, the edges needed work, the values/temperatures needed a push and the canvas often needed more paint. 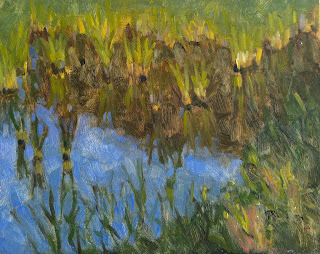 This was a 1 1/2 hour plein air study.  The paint is thinly applied, the foreground doesn't have a lot of interest, and the intended center of interest (the grass islands in the upper right area) doesn't stand out very well. 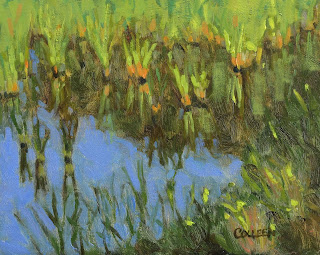 I added paint and brightened up the colors in all the grasses in the light, especially on the upper right area, and I added a few brighter highlights in the foreground.  I made the paint thicker in the blue sky reflections but left the dark reflections thin. 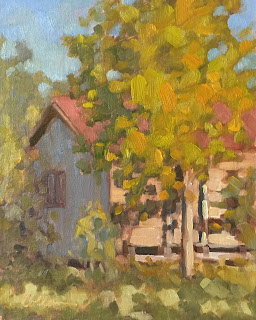 Here is another quick plein air piece.  I liked the light and shadow areas and was fairly happy with the contrast between the two.  I was very bothered by the 3 vertical lines formed by the straight tree trunk and the door frame.  The paint in much of the foliage was thinly applied and the shadows on the light side of the building were too spotty and distracting. 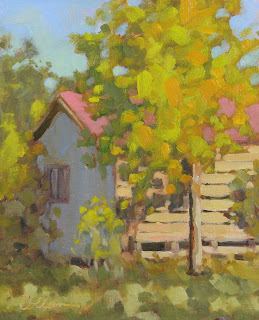 I eliminated the door.  If you didn't see the house yourself you would assume it was located outside of the painting.  I eliminated some of the dark shadows and tried to connect the darks as much as possible hoping to suggest a window.  I added paint to the sky and the cooler shadow areas, still leaving some thin areas there and put in a few thicker highlights on the foliage.  I also lightened up the roof a bit.

As I started to write this blog I realized something else.  I thought I was good about photographing my paintings for my records.  I had two examples that I really wanted to show, better than these, only to realize that I didn't have a photo of the "before" painting. Let that be a lesson to me...

So, pull out your old stuff and get busy!

Posted by Colleen Parker at 12:31 PM No comments: