Donating your artwork- pros and cons

In recent years I have been approached more frequently about donating paintings for silent auctions in charity events.  This now happens 3-5 times a year.  The venues have varied from outdoor festivals to large seated dinners.  I have mixed feelings about my experiences and have postponed writing about it because I wasn't sure what I wanted to say.

There is one very solid pro for donating your work to a charity you believe in, which the sheer joy of knowing that you have supported a good cause.  I feel particularly good when it is a local charity and I either know the people involved in the fundraising or the actual charity recipients.

There is a potential pro (and fundraisers usually bring this up when asking for donations) which is exposure for the artist.  In theory, many people at the event will view the artwork, remember the artist, and possibly buy their work in the future.  Maybe a bidding war will break out!  Gallery representatives might be in attendance!  Word of mouth can be a powerful thing.  I'll get back to this.

Now for the cons.  The subject of tax write-offs usually comes up. Fundraisers and the artists themselves often do not understand the existing federal tax laws.  Even with a signed form that includes the value of the donated artwork, the artist can only deduct the cost of the art supplies and framing expenses or any other service the artist pays someone else to complete the piece.  But consider this- if you are running your art as a business you have already deducted those expenses.  You can't deduct them twice.  So you are virtually giving your art away without any tax benefit.  If your art is a hobby and you do not deduct your expenses you can of course deduct them as a charity donation, but this will likely be much less than the value of the work.

Another con is the possibility of devaluing your art.  If the donated work sells at a price that is below its value, which is a common occurrence, the exposure can be a negative thing. Or let's say it doesn't sell at all- even worse!  All of those people saw that no one wanted your work.  Unless I attend the event myself I rarely get feedback about the winning bid, so I am in the dark regarding the nature of the exposure.  Consider also that if the work doesn't sell, the charity gets nothing.

Saying no is not easy either, especially if you are saying no to a friend or to someone who works hard to support the community.  Being told no is tough for  fundraisers.  They need to have thick skin and often work hard for little recognition.

So what to do?

I wish I had all the answers, but I have made some decisions for myself.  I want to support charities, but I cannot support them all.  I have decided to forgo outdoor festivals and similar venues, knowing that they are not good exposure for my work.  When approached in the future I will offer to write a check.  That will benefit the charity and I can deduct 100%.  I will continue to participate in a few events that are indoors in nice facilities with a large attendance.  Historically this is where I have raised the most money.  In one instance there was a bidding war for my painting which wound up selling for 4 times its actual worth.  (Alcohol was undoubtedly involved.)  I felt very good about that donation and it was a charity that is near and dear to me.

I had the opportunity last year to do a one artist show in a local business.  The venue was very nice and there was a well attended opening reception.  I was asked by the business owners to donate 25% of my sales to a local hospital.  This was a win-win.  I sold well, got great exposure and wrote a nice check to the hospital.  It also led to three commissions.  I have never had a subsequent sale, or even an inquiry that resulted from a charity auction.

An artist's decision regarding donations is a personal one.  My intention here was to create awareness of tax laws which are often misunderstood and to propose a thought process to help determine which venues work for the artist and charities. 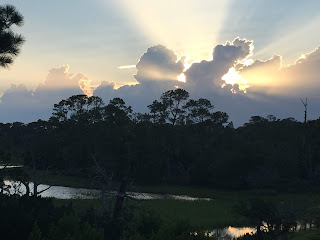 Marsh sunset, Kiawah Island, SC
my photo- no painting yet!

Posted by Colleen Parker at 1:49 PM No comments: